5 Top Exporting Countries in the World For 2020 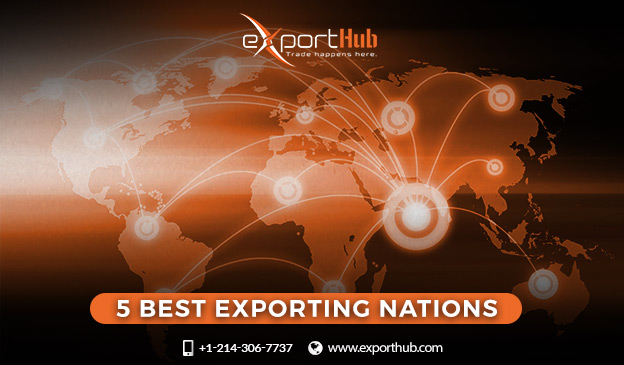 Humans love to compete with each other. If you take a look back in history, the most significant battles fought after both the World Wars, are the trade wars. One of the latest trade wars you can see hit the headlines is between two superpower nations, The USA and China. Still, that hasn’t stopped either one of these nations from increasing their exports throughout 2019. Having that said, here are the five top exporting countries in the world.

South Korea is known to be the world’s fifth largest exporter by considering their performance in the past couple of years. There was a time when South Korea was believed to be a developing country. However, their investment in the technology and machinery industry has helped them become the 4th largest economy in Asia, and 50% of South Korea’s GDP comprises of its exports. In 2017, their export sales showed a value of $573.7 billion.

Next up is another Asian country, Japan! Even after getting involved in a war with the USA, Japan never stopped growing. In fact, they’ve managed to become the 2nd largest exporter in Asia. In addition, their known to be the world’s 3rd largest manufacturer of automobiles. Japanese vehicles are supplied to various nations. Their biggest importers are the USA as they are supplied 20% of all the exports. In 2017, Japan’s exports sales were valued at $698.12 billion. If you are planning to trade with top Japanese manufacturers and suppliers then signing up on a leading Japan B2B Platform is the best decision you can make today!

Europe’s largest economy just had to make it in the top 3. Germany is experiencing growth for around a decade now. In addition, by analyzing their last recorded export sales of $1.448.3 trillion, they seem in no mood to slow down. Germany is also known as one of the largest manufacturers of luxuries cars. Their vehicles hold 18% off all the exports they make.

Yes, the country with the largest economy, the USA is at number two in the list of the top five exporting countries. Their export sales in 2017 were valued at over $1.546 trillion. The states are blessed with many natural resources that contribute to enhancing their exports. In addition, this mighty nation has the likes of some of the largest companies in the world like Google, Facebook, Microsoft and Apple.

China is the world’s largest and top exporting country. With the USA in second place, China had to be somewhere nearby, considering the trade war they are presently having. China is also known to be the manufacturing hub of tech products.

The high supply and low cost of labor give them a competitive advantage in the international market. In fact, this aspect has convinced many top companies like Apple and Samsung to set up their factories in China. The export sales of China recorded in 2017 were over $2.263 trillion. In addition, China is the home to some of the biggest online B2B marketplaces. B2B enterprises that seek Chinese suppliers can merely sign up on an international platform like ExportHub, which is dedicated to helping all importers meet relevant exporters from the top exporting countries.