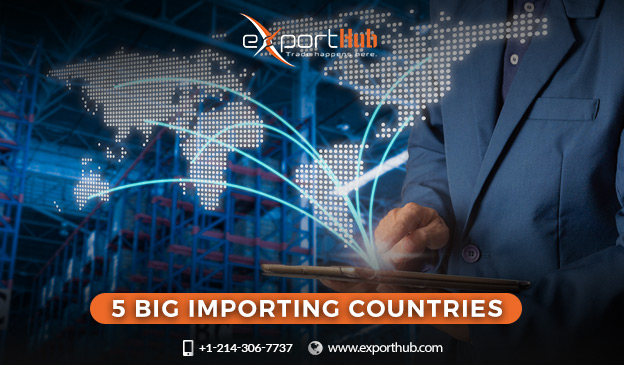 Imports are usually harmful to an economy as they affect the balance of payment of the country. However, there are certain circumstances like lack of resources or shortage of supply to fulfil demand, which leads to even the strongest economies to import. We have gathered a list of some of the top leading importing countries in the world.

The Russian Federation is a superpower that has always been active in international trade. Over the years, due to the rise in population, their imports have experienced a significant increase. Their last recorded value of imports in 2017 was $238.13 billion. Russia is responsible for 1.3% of overall global imports.

Around 47.1% of their imports were from European countries, while 42.2% were from Asian nations. Their import purchases comprise of Machinery, equipment, vehicles, pharmaceuticals, plastics and much more.

India is one of the largest countries in the world, with relation to its mass population and land. In addition, this nation has experienced rapid growth in its GDP, which has helped it become one of the biggest economies in the world.

India’s import purchases are valued at $447 billion, and this number reflects 2.5% of the overall global imports. Its common import partners are. China. Saudi Arabia, the UAE and the USA. They mainly import machinery, crude oil, chemicals, iron, steel and unique and expensive raw stones.

The United Kingdom is one of the best economies in the world. Their capital, London, is known to be one of the most popular and largest financial hubs on the planet. Due to the high cost of labor and shortage of supplies required in the manufacturing process, The UK has to import a lot from other nations.

Regardless of being a nation that has always been short on raw material, they have managed to become one of the top economies in the world. Major products that they import are metals, gas, oil, machinery, vehicles, agricultural products and much more.

Their imports are divided in the following manner. They import 9.7 % of all goods from China, 8.4% from the Netherlands, 7.6% from France and much more. This developed nation had an import purchase value of over $1.166 trillion and represented 6.5% of global imports.

At the top of the chart is none other than China. China has the largest population in the world. Therefore, in order to meet all demands, the nation has to import quite a lot. The major products that they import are oil, machinery, medical equipment, mineral fuels, plastics, etc. China’s major import partners comprise of Japan 11.2%, South Korea 9.3%, and the USA with 6.8%. This nation has a share of 10.2% of global imports and has a total import purchase value of over $1.843 trillion. China is known as a great nation to export your products to. In fact, there are many online B2B marketplaces, like ExportHub that have many Chinese buyers you can supply to. Hence, if you are looking for a place to target your exports to, sign up on ExportHub today to get access to their Chinese directory filled with authentic and guaranteed buyers.