Kee4 – A Virtual Based Keyboard with 4 Keys 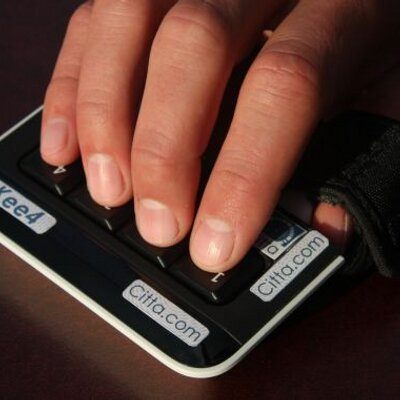 If we are talking about some distinct weaknesses of the devices like touch-screen enabled cell-phones and iPads, it’s their onscreen keyboards which are frustrating at times. These weaknesses are witnessed by some of the widely portable keyboards available, like Thanko folding keyboards, and Jorno Bluetooth.

Keeping that in mind, Citta Consulting is taking its approach to a different level with its portable keyboard named as Kee4 Keyboard – a device consisting of four keys which can be easily accessed with one hand through a system named as ‘composite keystroke.’

Kee4 is a keyboard enabled with Bluetooth worn on the hand along with a thumb positioned on a pouch to hold it firmly in place. This process allows the fingers to rest on the device so that the users don’t struggle to move their fingers key by key. If your touch is light, you might be able to get away using it freehanded, however, resting on a hard surface like the armrest or side of the body is suggested to stop the keyboard from moving once the keys are pressed.

With just four keys and more than four letters in the alphabet with numbers, lowercase and uppercase characters, function controls, symbols, and foreign language characters – the unit are focused on technology using different sets of keys known as the composite keystrokes, to create a high range of characters.

Kee4 is currently using two different types of keynotes. The first type of keynote is called a rocking composite keynote which includes a rocking motion where the second pressed key is the first to be released. On the other hand, a rolling type of composite keystroke involves a rolled-up motion where the first pressed key is released at first – just like drumming with fingers. The only viable deviations are the A, E, CTRL, and space which are created with just one keystroke.

Apparently, this is a type of system which requires a bit of practice, and watching demo videos on YouTube proves that the process is not at all complicated. Citta Consulting has got the device patented and is searching out for investors to bring the keyboard into the market for the ordinary people.

For people like the idea, the Kee4 website is the place where the simulator for the keyboard is available to download for free to indulge around different kinds of composite keystrokes.

Press the four key if you wish to enter in the control mode, followed by an individual key to enter into other modes.