Unveiling The Charm Of Rose Quartz 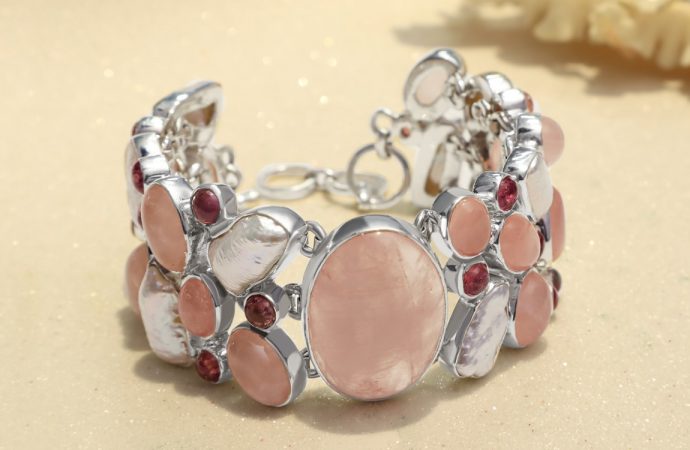 The pretty gemstone with pink hues holds the essence of divine affection and is also referred to as the crystal of love. It carries the warm energies of feminine compassion and tenderness, bringing healing and nourishment to the one who wears them. It peeks into the heart and opens up the past’s fears and pain, making one belief in the possibility of finding the new fondness. It circulates the calming sensation, reawakening the heart to the inherent love, providing a source to find the utmost feeling and acceptance.

Rose Quartz is called the heart stone and has been used as the token of love for centuries and still holds the same Crux as an essential talisman for building budding relationships. They are believed to have a powerful impact and act as an effective tool to attract new love, possibilities of romance and develop a strong bond among the family. It also attunes the body to the spiritual level connecting to the universal vibrations, thus creating a bridge between the two worlds.

It is formed as silicon dioxide and belongs to the quartz family, the most famous category among others. The formation sometimes becomes massive and sometimes grows in small prismatic clusters giving out a beautiful look to the rose quartz jewelry. The color of rose quartz is the highlight of the gem and brings forward the loving energies with the different shades of pink.

They have been deeply cherished by the ancients and have been recovered from the Egyptian tombs and were believed to have powers of cleaning complexion and preventing wrinkles. They are deeply prized by the Egyptian, Tibetian, and oriental cultures and are still widely used in China.

A stone ultimately used in love and putting out the energies to the world. Rose quartz is the bringer of posting energies and brings soothing sensations to one’s life. When placed near the bed or worn in the form of a rose quartz pendant, they attract the right love and bring peace to existing relations. It highlights the good things in life, thus giving out the serene in the world. However, the signal will be so wild at times that you might need a different, more powerful stone to calm down.

This appealing gem heals the heartache and opens the heart to channel all the bad energies into positive ones, bringing harmony, trust, and peace in daily life.

Rose Quartz at Home and Work

Rose quartz can be pretty effective when it comes to a chaotic home. It cleanses the environment and circulates the positive energies at home. It even brings calm to the troubled child; simply placing the unpolished rose quartz in the child’s mouth can calm the restlessness and even help with the angst.

Pets at home can also feel the energies of the rose quartz and works like magic on the rescued animals who have been part of the trauma before. Keeping the rose quartz in the drinking bowl of pets before feeding it to them will soothe their anxiety and make them more open.

Another great use of rose quartz is they are an excellent stone for women and helps them to balance their energies and hormones. For example, if the lady in the house is facing a problem related to fertility, then wearing the rose quartz ring will help her stimulate her hormones, thus providing her to getting pregnant.

At work, rose quartz can be placed in the corner of your seating. It will help you overcome the barrier blocking your way and provide a path to the new opportunities hampering your growth.

1: Rose quartz belongs to South Dakota in the united states and is the state mineral.
2: They have a delicate appearance but are potent stones that bring powerful magical healing and prevent aging.
3: They are highly used in the feng shui and are pretty popular among the Vastu shastra specialists.
4: In Australia, the bush doctor used rose quartz to treat medical ailments.
5: According to legend, rose quartz was formed when the god of war assaulted the greek god named adonis. Aphrodite cut herself when all of this was happening, and the blood that ran out of her hand later became rose quartz.
6: Being powerful stones, they do not need to be recharged regularly, meaning you can cleanse the gem with running water and can restore it under the full moon.
7: The stone is considered a fifth-anniversary gift and is gifted to the couple to celebrate the five years of companionship.

With all the pretty hues of pink, they are ideal beauty to incorporate in the jewelry collection of the admirer. They are just the perfect beauties that lead you on a journey giving you pure bliss in the form of jewelry.

If you are a jewelry enthusiast and are looking to buy the Wholesale Rose Quartz Jewelry, you can check out rananjay exports. They are the wholesale gemstone jewelry manufacturer based in India, serving the jewelry markets since 2013.